Our office bought a basket of flowers and balloons for her and the baby, so us three were sent to the hospital to deliver the goodies. We saw the baby...it was the cutest thing EVER! I wasn't all wrinkled and ugly like normal babies. Everything was so little. I love the babies little hands and little feet.

I want a baaaaby now too. So did Helen.
BABBBY.

Oh yea, Evan called me JeJe yesterday for the very first time.
I'm so proud of him.
*beam*
Scribbled by ~> ho ho at 9:11 AM No comments:

Uncle Patrick, a church family friend, was diagnosed with cancer less than a year ago. He went through his first round of chemo a few months ago and the effects were excruciating. He pulled through and the cancer was gone. Until it came back. When it did, Uncle Patrick decided to do his second round of chemo in Hong Kong, where his family was. A church friend, who has been checking up on him in HK, has been e-mailing us about his current condition. The effects of the second round were even worse, but he's getting better each day.


This is one of the best scriptures I have read so far. I realized that it is connected to what I was trying to express in a post a couple of months ago. I just thought I'd share that scripture. :D 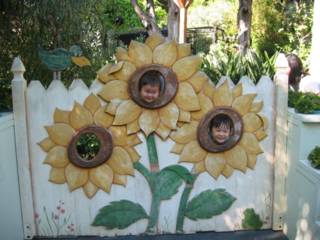 My most favorite picture ever! :D

Scribbled by ~> ho ho at 4:38 PM No comments:
Just thought I'd post some pictures up that Stuart e-mailed me.
Halloween pictures!

(Derk, this was the costume if I went to the trick-or-can event. ;D) 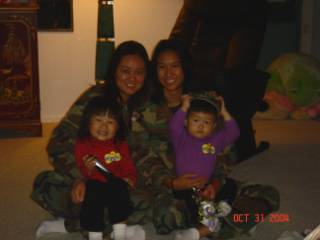 2 army chicks with Murray and Jeff from "The Wiggles" 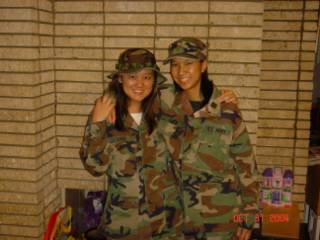 I am the luckiest girl. I was late getting to the courthouse cause it was a right on Alameda, not a left. I turned around and then there was a train. 5 minutes later, the train passes. I drive the other direction and then another train passes. But I get there in one piece.

My group is the first one called for a trial. Out of my group, I was one of the first ones to be a potential juror. Then after all the questioning, I was officially selected as a juror. I have to go back tomorrow and possibly, the day after that.

After we were excused for today, I realized it was pouring outside and then I realized I had left my umbrella in the car. I'm such a smartass. So I walked 3 blocks in the rain back to the Juror parking structure. During the walk, a bus decides to run over a puddle and splash water on my already-soaked jeans. I would have shook my fist at the bus and yelled, "Yea...PUSH 'EM WHEN THEY'RE DOWN, you stupid bus!" But instead, I laughed out loud after realizing that it was exactly how it happened in Bridget Jones! Except mine was a muuuuuch smaller puddle. Hahaha.


All the whining and complaining aside, I'm also kinda excited. The judge said the trial should run for a day and a half at the very latest. The last time I was selected for panel, the judge expected the trial to last for more than 15 days! (I got dismissed for that one. Lucky!) This time, I get to experience how the whole court system runs, while only having to serve for a couple of days. It never hurts to see new things. Y^_^Y Consider it free education. Heehee.

It also gave me time to finish the book I have been reading. Yet another chic-flicky book. But it's cute.

I guess that's it for now. I'm going to make myself some hot cocoa and watch my Chinese soap operas. ^_^

Those something-pausing ladies have deemed me as the "Air Conditioning Girl". ExCUSE me if I like air. And the other girls ask me to turn it on when they're hot because I'm closest to the machine. So it's not only me, biotches.


It's okay. My fiancee is really hot. It was a rather good dream, I'd say. Now that I think about it, I think my fiancee was the guy Helen and I saw at Home Depot named "Tommy" who we thought was flamin' hot like cheeto. He was even hotter because he's doesn't know he's a good-lookin' one.


Dude, man in an orange apron. Hubba hubba. *drOOOOOOOOOL*
Scribbled by ~> ho ho at 9:16 AM No comments:

Okay, so Jason has to work with a menopausing lady who turns up the A/C so that the office becomes the North Pole.

I have to work with two something-pausing ladies who refuses to breathe in air, making the vault (literally, our office use to be a vault) a freakin' volcano. I can't breathe, it's so hot in here. Their desk is right next to the window and close to the door. My desk is in the furthest corner away from the window and door.

I turned on the vent when I got here. 5 minutes later, I hear her turning down the vent slowly and then, till it's off completely. She thinks I don't know it's off. I have lungs. I know when it's off, dumbass.

I, seriously, am going to faint. Helen gets here at 10. 15 more minutes. She will turn it on. If she's late, I'm going to take the initiative and bring some air back into the vault.
Scribbled by ~> ho ho at 9:25 AM No comments:

Though, it surely doesn't feel like it. I've been working really hard. The process was arduous and long, but the actual action of it took all of 40 minutes.

I finished my last final. I was expecting worst and was waiting for it to kick my ( _o__o_) (ass nipples for kelly!) real bad. But I made it out alive.

CSULA was pretty ghetto. They forgot to pay Edison. While I was on page 8 of the final, electricity went bye-bye. Through the whole King Hall building. Through the ENTIRE school. People were stuck in elevators (poor things. during finals, no less!). I passed by the lecture halls. People in there were taking their tests with the light from their cell phones. Apparently, the emergency lights aren't very bright. Neither are the people. >_O

You know where else is getting to ghettoness? Where Sara and I live.
This morning (yes, today was a very exciting day)...I was waiting by the door for Wei-Han to come pick me up. I heard cars going fast and breaking. I heard men's voice talking rather loud. I heard commotion. I saw a flash of red light on the window. I looked outside and there were 5 police cars. No, they weren't here for me cause I'm too hot for humanity. ;D Okays, so they parked their cars so that they were all pointed at the blue house diagonal from mine. They blocked off both ends of Leonard. There was some sort of SWAT team, hiding behind the police car, with these long ass guns pointing at the house. The family of the blue house was outside and the mom was crying. = ( They stood there in their positions for about 10 minutes.

At my house, I quickly gathered my stuff and told my dad, "I'm going to wait for Wei-Han outside! Bye!!" Yes, I wanted to see what was going on. I've never seen a real-life SWAT team with real guns. But my dad pulled my backpack and dragged me back inside. (I feel like a kid again.) My mom started to get all panicky.

Mom: Daddy, tell the policeman that our son has to take the HIGH SCHOOL EXIT EXAM today! His car is in the way.
Me: Ma, I think that's the last thing on their mind right now.
Mom: Shush! Go!

My dad walks outside in his PJs.

Dad (inching forward): Excuse meee.
Policeman, hiding behind the policecar with a gun in his hand, ignores him.
Dad: Uh, CUUUSe meee. My son has to...
Policeman: Sir, I can't talk right now.
Dad: Oh, ok.


My parents are weird. I think that's where I get it from. Or maybe it's from DB.
So anyways, I got into Wei-Han's car and we had to drive around to get back on track. On the other side of the street, there was another policecar waiting. I figured it was in case the person tried to jump the fence to escape.


And that, my friends, was my morning. *whew*
Of all times, Sara and Damon aren't online. I was going to share my excitement with them. Yes, DB. My two friends. Sara's at work, I think, and Damon's probably at the chiropractor. His third love, aside from Sar and the Prelude. I guess blogger.com is all I have right now.

Now my next order of business. Clean my ROOM!! Dude, I've been waiting for this moment. I have a pile of clothes on my bed and another pile in the living room. I can throw away my study guides. Sell my books on Amazon. Maybe, if I have enough time, I can even dust and "swift" the floor's ass. Wei-Han, Amy, and I are going shopping to release all the tension later. Though, poor Amy has a final on Saturday. Now THAT'S why you never take Saturday classes, besides the fact that the class is on Saturday.

I didn't do too well on a Sociology paper that I tried really hard on. This professor likes papers to be straight to the point. Literally.

No such thing as a creative opening sentence for the introduction. Everything must be straight to the point. No such thing as making the paper flow with transition sentences, etc. I managed to do okay on my term paper with a English professor that was infamous for grading hard, yet I barely passed on my term paper for a Sociology class, where writing was not emphasized. Dude.

Oh welly. And life goes on. I'm hoping for a better week, where I can forget what happened this weekend and leave it be.

And it WILL be a better week. Glass is half full. Glass if half full. GLASS IS HALF FULL!!

Damn. I forgot to return my library books.
I now owe the Montebello Library $14.10.

Why do I have to be such a nerd and borrow so many books?
Scribbled by ~> ho ho at 4:11 PM No comments:
Newer Posts Older Posts Home