My dad came home with pictures from their trip to Thailand. As I sat there looking through the pictures, I came across this one... 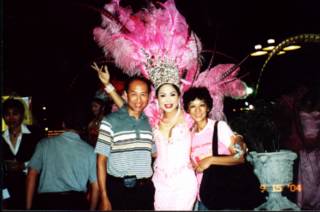 My dad can be soooo weird sometimes. ;D
Scribbled by ~> ho ho at 9:00 PM No comments:
DB gave me a new e-mail address...very nice, aye?
holliesucksbigballsandkahunas@hollileisavagina.com

So much to write...I think I'll start with Friday.

Friday
Pretty normal day, as usual. Work was good. Afterwards, met up with Sara, Damon, and Jason for some b-day celebration at CPK down in Old Town. Jason bought Sara a martini? and she turned RED. She gave me a sip or two. Not bad. Not bad at all.
Haha. I ordered the Santa Fe chicken pizza. Now THAT was good. Everyone pretty much agreed, huh? ;D We had plenty of laughs during dinner. What were we laughing at? Jason's laugh. Someone said it sounded like a piano scale. Hahaha HA hahaha. With Sara drunk, it only made things more entertaining. I'm sure the CPK waiters thought we were a group of doofus(es?) laughing at absolutely nothing. :D We needed to burn off those calories.

After dinner, we headed on home. Damon didn't think Sara and I could drive her car home, so he drove it to my house. We all hung out at my house (cause no parents! Woot Woot!) until it got kinda late. So, the guys left. Sara stayed over for the night. We busted out the inflattable bed that blows up by itself. Sara turned on the machine and the bed start to inflate. Slooooowly. She stopped the machine and I took over. We look back at the bed and it was flat! What the hell! We couldn't figure it out, till Sara the genius, figured out that we didn't close the lid to where the air is released when we want to deflate it. :D Finally, we got the bed blown up. Sara stayed up with me to watch Friday's episode of Stairway to Heaven. (thanks!!) By the end, both of us were so tired, we just fell asleep. No looong talks like before. Maybe next time Sara!

My brother was rather shocked in the morning to see 2 bodies laying in the living room. (He didn't know Sara slept over.) We all washed up by 10:30 am and got McDonald's before it stops serving breakfast at 11. We really gotta do that again. :D


Saturday
Today was the day of Sara's surprise party. (Thanks to everyone for showing up!) Things got off on a rocky start. We left Damon's house around 5:15. Jason called and said no one was there yet. It was already 5:30, by that time. Basically, we needed to slow down. That was the best time to be bilingual. I told Damon in Chinese to slow down. Sara has been hanging around us, Chinese people, way too much cause she, somehow, figured it out! O_O Got another call 15 minutes later that 4 people out of 25 were there. So now, I pretended I had to pee real bad. We got dropped off at Babies R' Us to "go". Hung around the Spectrum until we got an A-Okay to start heading over there.

SURPRISE!! Yea, she was. Right Sara? ;D BJ's was good. She got a couple of drinks. She opened her gifts, except for some "lingerie" she refused to show everyone. We decapitated Hello Kitty and ate her, along with some Bazooka. Damn, that was good. Afterwards, we headed on over to D&B's (seriously. Forget the bonfire. We're doing D&B's!). Now THAT place is fun. Everyone decided to hit the games, while Ape, Kelly, Steph, and I decided to hit The Bar. Ape took me up there to get some drinks. My first time. Very exciting. Of course, got our ID checked. :D...from then on, we made many more trips back to to Matt, our bartender.

I hope that's everything. One more? I really can't remember. Ape is the BEST! I would not have had as much fun if she weren't there. (Imagine if Ra was there!) Sara was even further away than I was! She made everyone laugh. I didn't really do anything crazy that crazy. I hit on Lynette and bought her a Roy Rogers. Ape told me I had to hit on a guy while I was there, so I did. I hit Jason. Several times. Then Kelly hit Jason (she was sober). Poor guy. Gettin' beat up by a couple of girls. I, by the way, also won the Uncomfortable Game. The first one to beat Kelly! *cheers* I harassed Irvsjournal.com to take a quarter from me, so he can finish off his arcade game. Ummm...nothing else. That's it. No more. It was all good.

Thank you to Steph, Lynette, Claudia,& Kelly for taking care of me while I was away. I hope I was nice to you guys. After everyone started to leave, we decided to leave also. We sat outside for a bit, while Sara sobered up. It still took us a while to get ourselves TO the car, with Sara kissing everyone goodbye. (I really don't remember that. I was told this the next day.) Thank you to Jason for taking me home. He was nice enough to tell my brother that he was willing to sell my drunken stories of that night to him. Just in case he ever needed it. Boys. *eyes are a-rollin'* And that concludes my Saturday.

Got an email from my Dad!
This is part of their adventures in Thailand...

...We went jet ski and
banana boat ride and did some shopping. we also went to see a live girl
singing and dancing show. They were very beautiful and nice body figure. At
the end we took a picture of one of the dancing girl. And Guess What? iT
TURN out that all of them are men. We are leaving from paraya to bangkok
today. We talik about our adventure when we gets home.
Love Dad And mom.

ha ha. I just came across a patient named "Wong, Ho Ho".
Suckerr.
Scribbled by ~> ho ho at 3:38 PM No comments:
I am so lame. Yesterday I had dinner with my Grandma at my Aunty's house. By the time I came back from picking up dinner, it was already 15 minutes into my Stairway to Heaven. O_O So I ran to the TV, plopped myself down, and watched sexy Oppa look for Jing Shu, who, by the way, is dying of cancer. Five minutes later, Paige finishes her bath, walks over to me and says, "Jeje, I want to watch Wiggles. I was thinking, "Frick Fricky Friccck." I asked her, "Paige, can you give Jeje 10 minutes? Pleaaaase?"

And that is why I am so lame. I'm standing there arguing with a 3 year old for the TV.

Teehee. She watched Stairway with me till it ended. Every once in a while, I hear, "Jeje, why is she crying?" I think we bonded.


P.S. I did let her watch Wiggles afterwards!

My parents are, as of this moment, in the land where Rachel lives. Thailand! They decided to take a quick trip for a week over there on a tour. I took an hour off to drive them to take the airport shuttle yesterday.

And sooo, Shelby and I have the whole house to ourselves! You would think I would enjoy it, but it's actually pretty quiet. No nagging whatsoever. It's times like this morning I had to wake up at 6:45 in the frickin' morning to take Shelby to zero period that I miss my parents.

It's expected that I have a party since my parents aren't home. But no such luck since this weekend is already all packed. ('Rents coming home this Sunday.)

In Christ alone my hope is found
He is my light, my strength, my song
This Cornerstone, this solid ground
Firm through the fiercest drought and storm
What heights of love, what depths of peace
When fears are stilled, when strivings cease
My Comforter, my All in All
Here in the love of Christ I stand

In Christ alone, who took on flesh
Fullness of God in helpless babe
This gift of love and righteousness
Scorned by the ones He came to save
‘Til on that cross as Jesus died
The wrath of God was satisfied
For every sin on Him was laid
Here in the death of Christ I live

No guilt of life, no fear in death
This is the power of Christ in me
From life’s first cry to final breath
JESUS COMMANDS MY DESTINY
No power of hell, no scheme of man
Can ever pluck me from His hand
‘til He returns or CALLS ME HOME
Here in the power of Christ I’ll stand

I want to sleep. Nothing will worry me. I just sleep. That means I can go Home.
That'd be nice.
Scribbled by ~> ho ho at 9:42 AM No comments:
Newer Posts Older Posts Home